Skip to primary content
Skip to secondary content
Our family embarked on a spiritual journey in late November. We decided to purchase our own Hanukkiah and light the candles each night. We have talked about the holiday of Hanukkah before, but it was time to put it into practice and allow the Holy Spirit to lead and teach us. (Okay, yes, it was mainly because of my urging, but they were great sports!). So, each night, we went through a devotion looking at various aspects of the holiday, the biblical significance and the practical application to our lives. It was a very rich experience. Below is a ‘journal’ of the evening lessons. I hope that they are a blessing to you and will encourage you to try it with your own family next year!
Okay, here’s our picture from day one of Hanukkah. We are clearly rookies at this and are learning as we go!  (I discovered that we weren’t suppose to insert all of the candles right away. At least we lit

the right ones- from right to left!) We devoted the lesson to the historical story of Hanukkah. It’s an eight-day celebration commemorating the victory of the Jews (led by Judah Maccabee) over the Syrians. The Syrian ruler, Antiochus Epiphanes, had devastated Jerusalem in 168 B.C. by defiling the Temple and prohibiting Temple worship. It was a terrible time of persecution for the Jews. But Judah and his small, but courageous, ban of Jews stood up for their faith and took back the Temple! When it was time to rededicate the Temple to God, there was only enough oil to burn for one day, but the Lord miraculously kept the oil burning for eight days until they could make more. (Hence, the eight-day holiday. And by the way, Hanukkah means ‘dedication.’)
Lesson: God was a faithful miracle-worker then and He still is today!
Day two we learned about the Shamash candle. This is the middle candle that is used to light all the other candles.  Shamash means “servant.’ What a beautiful picture of Jesus, who is the ‘light to all mankind.’ John 1:1-14 speaks of this Light that has come into the world…
‘In the beginning was the Word, and the Word was with God, and the Word was God. He was with God in the beginning. Through him all things were made; without him nothing was made that has been made. In him was life, and that life was the light of all mankind. The light shines in the darkness, and the darkness has not overcome it.There was a man sent from God whose name was John. He came as a witness to testifyconcerning that light, so that through him all might believe. He himself was not the light; he came only as a witness to the light.The true light that gives light to everyone was coming into the world. He was in the world, and though the world was made through him, the world did not recognize him. He came to that which was his own, but his own did not receive him. Yet to all who did receive him, to those who believed in his name, he gave the right to become children of God— children born not of natural descent, nor of human decision or a husband’s will, but born of God.

The Word became flesh and made his dwelling among us. We have seen his glory, the glory of the one and only Son, who came from the Father, full of grace and truth.’

I love the passage in Philippians chapter two that describes Jesus as a servant (a Shamash):
‘Who, being in very nature God, did not consider equality with God something to be used to his own advantage; rather, he made himself nothing by taking the very nature of a

servant, being made in human likeness. And being found in appearance as a man, he humbled himself by becoming obedient to death—even death on a cross!

Therefore God exalted him to the highest place and gave him the name that is above every name, that at the name of Jesus every knee should bow, in heaven and on earth and under the earth, and every tongue acknowledge that Jesus Christ is Lord, to the glory of God the Father.’ (Philippians 2:6-11)

Application? Serve others like Christ did. Consider others more important than yourself.

Days three and four of Hanukkah (or Chanukah? Or Hanukah?), we looked at the practical uses and biblical symbolism of olive oil. Olive oil was the type that was used in the Tabernacle and Temple Menorahs, as well as the Hanukkiahs.

Throughout Bible times, olive oil was also used for cooking, medicine, anointing and lighting. Before candles, Menorahs only used oil in the lamps (and many still do today). I have a clay oil lamp and bottle of olive oil from Nazereth, Israel, so we decided to light it as well. Pretty cool.

In several verses throughout the whole Bible, oil symbolizes the Holy Spirit. We read this awesome passage about how we are like the clay vessels and how the Holy Spirit indwells

in us, like the vessel holds the oil. The wick ignites as our faith is ignited in our hearts by God’s power and knowledge!

‘For God, who said, “Let light shine out of darkness,” made his light shine in our hearts to give us the light of the knowledge of God’s glory displayed in the face of Christ. But we have this treasure in jars of clay to show that this all-surpassing power is from God and not from us.’ (2 Cor 4:6-7)

On day five, we continued our lesson of the olive oil (which was the type of oil used to light the Temple Menorah). We took a closer look at the tedious process of extracting oil from the olive fruit- the ancient method of the olive press.

Did you know that the Greek name for olive press is Gethsemane? The olive press, or gethsemane, was a circular stone basin where the olives were poured into. Then a very heavy millstone (pulled by an animal) crushed the olives and the extracted oil dripped down into a groove in the basin and into a gathering pit at the bottom.

This, of course, ties in perfectly to the Easter and Passover stories, but it also expresses the very reason Jesus came to Earth two thousand years ago as a baby. He came to die. He was the promised Messiah that the prophets spoke about and yearned for!

“But he was pierced for our transgressions, he was crushed for our iniquities; the punishment that brought us peace was on him, and by his wounds we are healed.” (Isaiah 53:5)

Do you see the picture of the olive being pressed? And what comes out? The life-giving oil.

He came to take the heavy burden of sin upon Himself to give us life. Jesus is the Giver of Eternal Life!

Yesterday, we read the verses in 2 Corinthians 4:6-7. The next three verses in this passage are the following: ‘We are hard pressed on every side, but not crushed; perplexed, but not in despair; persecuted, but not abandoned; struck down, but not destroyed. We always carry around in our body the death of Jesus, so that the life of Jesus may also be revealed in our body.’ (2 Cor 4:8-10).

Application? Remember the eternal life-giving Holy Spirit that is in us that gives us hope and strength in times of affliction and persecution. Jesus already took the crushing punishment of death for us so that we may have life; abundantly now and forever!

On days six and seven, we looked at the history, elements and symbolism of the seven-branch Menorah). In Exodus 25:31-40, we learned the Lord instructed Moses that the Tabernacle Temple was to be made of one solid block of gold and molded into seven branches. Lesson? The people of God are to be unified, but are diversified.

Jesus also expresses in John 17 His desire that His followers would be unified. ‘I pray also for those who will believe in me through their message, that all of them may be one, Father, 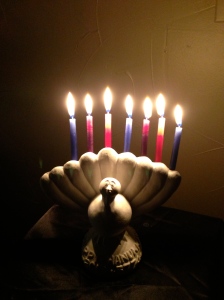 Application? Strive for unity within the body of Christ.

Day eight has been recorded in its own entry, titled, “Hanukkah: Preparing the Way to Christmas!”