One special field the Father has cultivated in me over the years is my love for Israel- His Covenant People and also His Covenant Land.  About twelve years ago, the Lord truly broke my heart. I had been clicking around the tv channels one day when I came upon a show covering a religious service. The two men on the stage were a Lutheran minister and a Jewish rabbi. The minister was asking forgiveness on behalf of his Christian brethren to the  rabbi and the Jewish congregation. He referred to the Jews as their ‘elder brother.’ I just wept. I had never heard this type of public confession or this choice of relationship with the Jews from a Christian leader in my life- at least that got my attention like it did this time. I was finding myself also asking forgiveness for the atrocities that were committed during the Holocaust- especially for those that were committed by professing Christians. During this somber moment, I clearly remember the Lord telling me, “Pray for Israel.” Honestly, I had never before had an inkling of a desire to do such a thing and at the time I didn’t really understand what He was asking of me. “Who is Israel?” was my first question! And my second question was, “Why would I, a 32 year-old American gentile woman care about a country the size of New Jersey on the other side of the world, or a people group I had very little interaction with?” It didn’t make any sense to me. But I could not deny what the Lord was telling me or the ache I felt in my heart. I knew I needed to first figure out who Israel was if I was to obey His instruction to pray.

I started with a few phone calls. My only Jewish-Christian friend gave me some guidance, though I could tell my inquiry baffled her a bit. When she came to accept Yeshua (Jesus) years before I met her, she seemed to have left most traces of her past Jewish heritage- at least from what I saw at church. I didn’t know her all that well. What she did in her home may have given me a different perspective than what I saw during Sunday morning. Though I do remember she loved to dance during worship. That may have been influenced by her Jewish upbringing. I would watch her with admiration, wishing I could express myself that freely and joyfully!

The Lord was so gracious to me as He continued to plant seeds of truth. Below are a few verses He led me to that helped me figure out how this ‘holy whisper’ about Israel fit into my life (and into the bigger story unfolding according to the biblical account):

The Lord had said to Abram, “Go from your country, your people and your father’s household to the land I will show you.

“I will make you into a great nation,
and I will bless you;
I will make your name great,
and you will be a blessing.
I will bless those who bless you,
and whoever curses you I will curse;
and all peoples on earth
will be blessed through you.”

‘Pray for the peace of Jerusalem:
“May those who love you be secure.’

The next passage of Scripture explaining the relationship between Jews and Non-Jews is a bit long, but it is well worth a complete read through, so don’t skim! I’ve chosen The Message translation because it speaks my language very clearly. I hope you are blessed by it. Please look up another translation if you prefer.

‘The next question is, “Are they down for the count? Are they out of this for good?” And the answer is a clear-cut No. Ironically when they walked out, they left the door open and the outsiders walked in. But the next thing you know, the Jews were starting to wonder if perhaps they had walked out on a good thing. Now, if their leaving triggered this worldwide coming of non-Jewish outsiders to God’s kingdom, just imagine the effect of their coming back! What a homecoming!

But I don’t want to go on about them. It’s you, the outsiders, that I’m concerned with now. Because my personal assignment is focused on the so-called outsiders, I make as much of 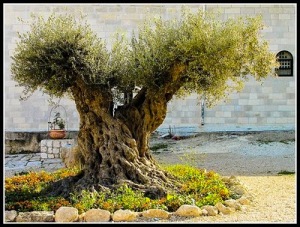 this as I can when I’m among my Israelite kin, the so-called insiders, hoping they’ll realize what they’re missing and want to get in on what God is doing. If their falling out initiated this worldwide coming together, their recovery is going to set off something even better: mass homecoming! If the first thing the Jews did, even though it was wrong for them, turned out for your good, just think what’s going to happen when they get it right!

Behind and underneath all this there is a holy, God-planted, God-tended root. If the primary root of the tree is holy, there’s bound to be some holy fruit. Some of the tree’s branches were pruned and you wild olive shoots were grafted in. Yet the fact that you are now fed by that rich and holy root gives you no cause to crow over the pruned branches. Remember, you aren’t feeding the root; the root is feeding you.

It’s certainly possible to say, “Other branches were pruned so that I could be grafted in!” Well and good. But they were pruned because they were deadwood, no longer connected by belief and commitment to the root. The only reason you’re on the tree is because your graft “took” when you believed, and because you’re connected to that belief-nurturing root. So don’t get cocky and strut your branch. Be humbly mindful of the root that keeps you lithe and green.

If God didn’t think twice about taking pruning shears to the natural branches, why would he hesitate over you? He wouldn’t give it a second thought. Make sure you stay alert to these qualities of gentle kindness and ruthless severity that exist side by side in God—ruthless with the deadwood, gentle with the grafted shoot. But don’t presume on this gentleness. The moment you become deadwood, you’re out of there.

And don’t get to feeling superior to those pruned branches down on the ground. If they don’t persist in remaining deadwood, they could very well get grafted back in. God can do

that. He can perform miracle grafts. Why, if he could graft you—branches cut from a tree out in the wild—into an orchard tree, he certainly isn’t going to have any trouble grafting branches back into the tree they grew from in the first place. Just be glad you’re in the tree, and hope for the best for the others.

I want to lay all this out on the table as clearly as I can, friends. This is complicated. It would be easy to misinterpret what’s going on and arrogantly assume that you’re royalty and they’re just rabble, out on their ears for good. But that’s not it at all. This hardness on the part of insider Israel toward God is temporary. Its effect is to open things up to all the outsiders so that we end up with a full house. Before it’s all over, there will be a complete Israel. As it is written,

A champion will stride down from the mountain of Zion;
he’ll clean house in Jacob.
And this is my commitment to my people:
removal of their sins.

From your point of view as you hear and embrace the good news of the Message, it looks like the Jews are God’s enemies. But looked at from the long-range perspective of God’s overall purpose, they remain God’s oldest friends. God’s gifts and God’s call are under full warranty—never canceled, never rescinded.

There was a time not so long ago when you were on the outs with God. But then the Jews slammed the door on him and things opened up for you. Now they are on the outs. But with the door held wide open for you, they have a way back in. In one way or another, God makes sure that we all experience what it means to be outside so that he can personally open the door and welcome us back in.’ 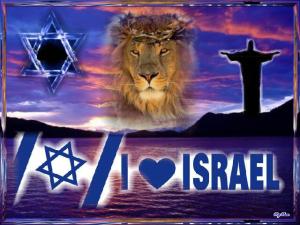 So, this was the beginning stage of my newfound love of Israel. I consider it the closest thing to a life transformation, next to my salvation in Jesus. I guess I could better describe it as the fruit that flourished from my wild branch because of the strong vine it was now connected to!